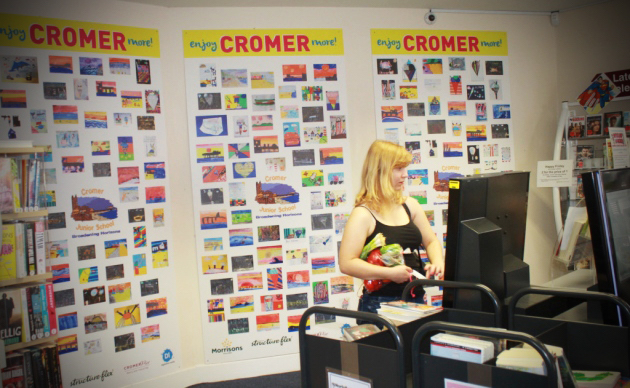 Landmarks including the pier, beach, and lighthouse were among the subjects chosen for an art competition asking pupils at Comer Junior School to produce a picture showing what they love most about the town.

Attracting nearly 200 entries, the competition saw children draw and paint scenes ranging from a lifeboat rescue and sun sets, to buckets and spades, ice cream and fish and chips with the winning entries turned into big pieces of art by Structure-flex.

The art work incorporated montages of all the entries and were produced on large weather-proof boards for display at Cromer library during the summer holidays, before going on permanent display in the school playground.

Sheila Breslin, who is library manager at Cromer, Sheringham and Mundesley, said library staff and visitors were “delighted” with the boards and added: “They are amazing.”

The competition was run by the Enjoy Cromer More and we think they look great!