Lorry Curtains Have Just Got Fruity 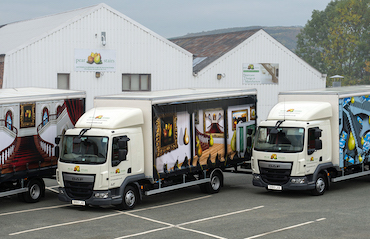 Structure-flex, who has been a leading manufacturer of high quality tension curtains since the product was first invented in the early 1970s, prides itself on the accurate transfer of its client’s designs onto the curtain surface, perfectly bringing the pieces of work to life.

For over a century, Pear Stairs, the leading UK manufacturer of unique, sustainable, staircases has been working with the best designers and craftsmen to produce stairs and staircases to fulfil every customer's design.

With this kind of reputation to uphold, it was little wonder that when it came to their lorry curtains Pear Stairs carried through this creative flair with a range of surreal designs, giving a massive pear-shaped twist to a host of famous paintings.

Each design was created from concept to completion by artist Clare Harper who studied at Central St Martins in London, it was an open brief and Clare seized the opportunity to produce something extraordinary.

Inspired by M. C. Escher’s painting Relativity, with its never-ending, impossible staircase combined with a nod to Magritte’s Golconda (only raining pears!), the aim was to pique the viewer’s curiosity by making the images both obvious and obscure simultaneously,  provoking a second look to ascertain exactly what was being advertised.

Although there are pears and stairs everywhere on the canvasses, any reference to the company name is subtly woven into the image so the viewer has to look for it.

Great works of art were developed with a ‘pear’ theme and printed at eye-popping proportions onto PVC coated polyester which carries deep, saturated colours to perfection, creating a truly unforgettable image.

Vermeer’s The Girl with the Pear Earring, Rene Magritte’s Son of Man and Damien Hirst’s A Pear Divided are just a few of the works that were given the Pear Stair twist along with Salvador Dali’s famous melting clocks – or rather, pears – and even Munch’s The Scream.

And, an entire lorry was devoted to a tribute to Heironymous Bosch where, after sporting themselves in the Garden of Earthly Delights, some of the pears can be seen getting their just desserts!

With all this creativity, it’s not surprising that Structure-flex’s work for Pear Stairs, was nominated for a prestigious industry award in the Wide Format And Super Wide Format category of the Digital Print, Design & Marketing Awards 2017.